Members of the Nigerian Association of Resident Doctors, NARD, have agreed to go on an indefinite strike starting today, Monday, 2nd 0f August 2021, Over the Failure of the Government to Honor and Implement the Memorandum of Understanding (MoU), it signed with them over 100 days ago. 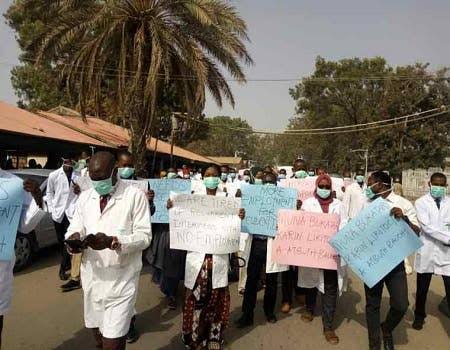 Members of the Nigerian Association of Resident Doctors, NARD, have agreed to go on an indefinite strike starting today, Monday, 2nd 0f August 2021, Over the Failure of the Government to Honor and Implement the Memorandum of Understanding (MoU), it signed with them over 100 days ago.

The Nigerian Association of Resident Doctor’s (NARD) on Tuesday, 27TH of July, 2021, decided to embark on a strike shortly after the 3rd case of the new strain of the covid virus had been discovered in Lagos.

after much deliberation the doctors had concluded their meeting, The National Executive council (NEC) which had over 50 of its members present, that due to the failure of the Government to Honor and implement all that was agreed upon in their Memorandum of Understanding (MoU), which was held and signed on the 14th of March followed by an addendum on the 9th of April they were going on an indefinite strike starting today the 2nd of August.

Dr Uyilawa Okhuaihesuyi, President of the NARD, made this known in a statement during the weekend, demanded immediate withdrawal of the circular removing House Officers from the scheme of service, which was not implemented.

“We are embarking on a total and indefinite strike on August 2, 2021 [Monday]. You can recall we had a memorandum of action on March 31, 2021, and had an addendum to it on April 9, and since then, we still have had irregularities in the payment of salaries to the house officers.”

“We had issues with them being non-regular payment and as part of the memorandum of action, it was said that they should be captured back into the IPPIS platform.”

He explained that members of the group are facing serious financial difficulties over the non-payment of their wages and salaries adding that despite several warnings, the government administration has done nothing to solve the issue.

Dr Aigbovo Roland, The General Secretary of, Federal Capital Territory Chapter of NARD, pointed out that there have been salary shortfalls since the migration to the Integrated Personnel and Payroll Information System (IPPIS).

He threatened that health workers who are affected by the salary deductions will join the mass action within 48 hours if their demands are not met.

The strike action is starting at a very critical time, with the 3rd wave of the coronavirus just beginning. The deadly coronavirus is spreading fast with a third case confirmed in Lagos on Tuesday. A 30-year-old woman who had just returned from the UK, who was tested positive for the virus.

She has since then been on quarantine.

Negotiations between FG and NARD fails, Back to Court.