SON discovers and evacuates counterfeit products from market after an affected victim filed a report. 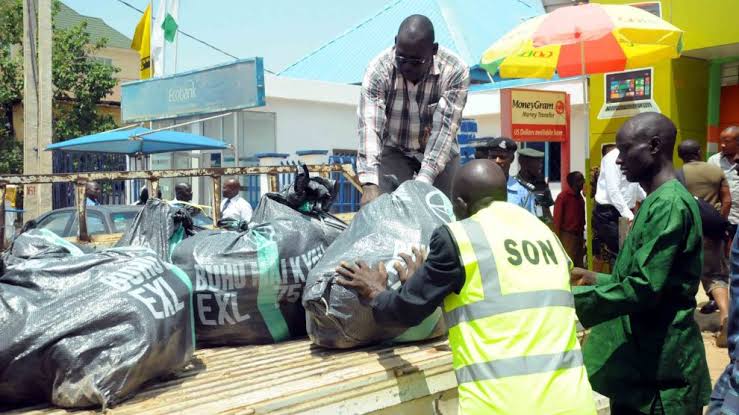 SON discovers and evacuates counterfeit products from market after an affected victim filed a report.

The Public Relations Officer of SON in Enugu, Mr. Paul Iorkyaa, said in a statement on Saturday.

the raid on the market was carried out by SON officials on Friday.

He said the raid was carried out after a complaint about fake and injurious BAMA mayonnaise being lodged by a public-spirited individual to SON Markets Desk Office in Enugu.

“In the Standards Organisation of Nigeria efforts to promote consumer confidence and satisfaction through its quality assurance of product and services, the organisation’s Enugu State office responded to complaints received from a consumer on July 13.

“After due market surveillance by the desk officers, a market raid led by the Head of Department SON Enugu Market Desk Office, Mrs Maryrose Ugwueche, was successfully carried out.

“The successful raid was carried out alongside the security services of Abakpa-Nike Market Association in collaboration with the market chairperson.

“During the raid, it was discovered that different brands of foreign Mayonnaise with no certification mark, traceability and some of which had expired were relabeled with the fake label of BAMA Mayonnaise.

“These fake, substandard and injurious Mayonnaise cream bottles were evacuated from the market,” he said.

the raid attracted great number of consumers who were grateful to SON for evacuating the unwholesome products.

“The raid gave room for a brief sensitisation to the need to patronise only products certified by SON under its MANCAP and SONCAP Scheme with display of MANCAP logo of some certified products around,” Iorkyaa said.

The SON spokesman added that further investigation was still on over the matter.

“The organisation is digging deep to discover the manufacturer and supply chain of the inferior mayonnaise cream within the market and other markets in the state and country at large,” he said.