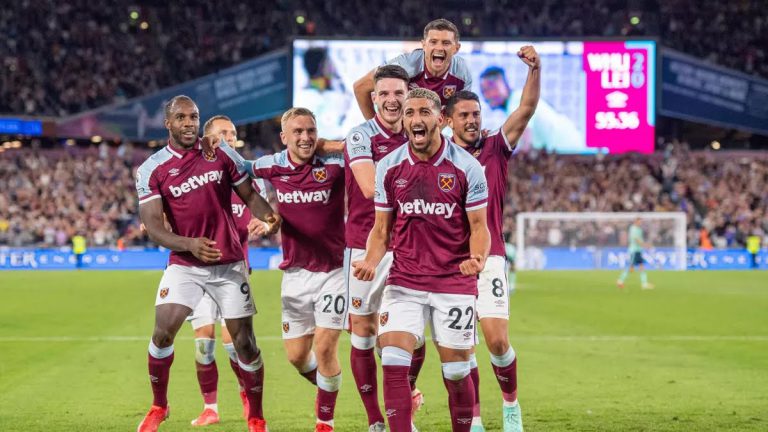 after a stellar solo performance Michail Antonio had to wait for his moment in the Hammers’ sensational victory, with Pablo Fornals opening the scoring from a one-two with Said Benrahma after Jamie Vardy’s poor pass.

The Spanish midfielder was left on the floor minutes before half-time by Ayoze Perez and after a VAR review noticed a stamp from the Foxes man on Fornals’ shin, Michael Oliver showed him a straight red card.

Leicester made their own task harder when Caglar Soyuncu’s blind backpass was picked off by Antonio, who teed up Benrahma to fire in from 18 yards.

Antonio would then take centre stage for himself late on to become the club’s record Premier League scorer. He held off Soyuncu to power home his 48th league goal for the club, breaking Paolo Di Canio’s record and then celebrating with a cardboard cut-out of himself.

He then moved within one of his half century four minutes later, taking one touch from Vladimir Coufal’s cross to take the ball away from his man, and beating Kasper Schmeichel with a second to spark yet more wild celebrations among West Ham’s first full home support since February 2020.

“He is a special player and if he cost West Ham £50m or £60m, they would be raving about what they had done in the transfer market,” Carragher told Monday Night Football after the match. “We talk about him as a personality, we all like him. But what should not be lost is his absolute quality as a player.”