Contract Awards given out for the Rehabilitation of the National Theatre.

The Bankers’ Committee last week awarded contracts for the rehabilitation of the National Arts Theatre in Lagos and the exercise is slated to start in September. 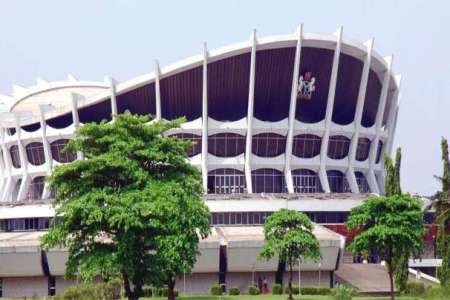 The Bankers’ Committee last week awarded contracts for the rehabilitation of the National Arts Theatre in Lagos and the exercise is slated to start in September.

CHIMA NWOKOJI in this report looks at how the multi billion naira CBN-led project will boost activities in the sector and open new windows of forex generation, job creation.

REMODELING of the National Arts Theatre under the ‘Lagos Creative and Entertainment Centre’ was part of a resolution made by the exclusive forum of chief executives of Nigerian banks and directors of different departments of the Central Bank of Nigeria (CBN).

The CBN and the bankers had agreed to support the creative industry through the transformation of the edifice into the Lagos Creative and Entertainment Centre.

To that effect, a Memorandum of Understanding and contract award signing ceremony was organised between the Federal Government, represented by the Minister of Information and Culture, Lai Mohammed and the Bankers’ Committee, represented by the CBN Governor, Godwin Emefiele.

Speaking during the signing of MoU for the handing over of the Theatre to the Bankers’ Committee by the Federal Government last year in Lagos, Emefiele said the project would restore the glory of an iconic building by aligning most of the fabric and equipment and facilities in the building with the aesthetics of the 21st Century.

The Creative Industry Financing Initiative (CIFI) is a loan scheme developed in collaboration with the CBN to provide access to long-term and low-interest financing for entrepreneurs in the creative industry, including Fashion, Music, Movies, and Information Technology.

The CBN governor said the Bankers’ Committee would equally be funding a prototype cluster located to the north of the National Arts Theatre, labelled the “Signature Cluster” consisting of a building each for music, film, fashion and Information Technology verticals.

Lagos State Governor Babajide Sanwo-Olu said the project was an opportunity to write Nigeria’s name in gold for the future generation. “The project showed that when private and public enterprises partner, there is nothing that cannot be achieved,” he said.

Based on the design, a Signature Cluster will consist of a building each for Music, Film, Fashion and Information Technology verticals as a Welcome/Visitor’s Centre, Police and Fire Stations, and structured parking for up to 500 vehicles would be built.

It will boost the creative and IT sectors in the areas of job creation, capacity building and foreign exchange (FX) revenue generation.

It would provide space, support network, business development and community engagement for the creative, cultural and technology sectors. These sectors contribute a lot to the Gross National Product.