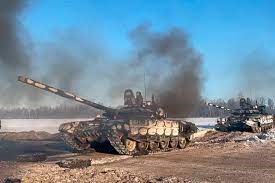 A senior Ukrainian defense official warned that Russian forces would enter areas just outside the capital Kyiv later on, after officials said the city and other locations had been struck by Russian missiles in the early hours of the morning.

Meanwhile, Ukrainian President Volodymyr Zelenskiy said that Russian forces are targeting civilian areas and urged Russians to protest against war. Earlier, he said that Russia resumed missile strikes at 4 a.m., but its troops had been stopped from advancing in most directions. In a televised speech, Zelenskiy said the Russian strikes were aimed at both military and civilian targets.

Russia pressed its invasion of Ukraine to the outskirts of the capital on Friday after unleashing airstrikes on cities and military bases and sending in troops and tanks from three sides in an attack that could rewrite the global Post-Cold War security order. Explosions sounded before dawn in Kyiv as Western leaders scheduled an emergency meeting and Ukraine’s president pleaded for international help.

The nature of the explosions was not immediately clear, but the blasts came amid signs that the capital and largest Ukrainian city was increasingly threatened following a day of fighting that left more than 100 Ukrainians dead.