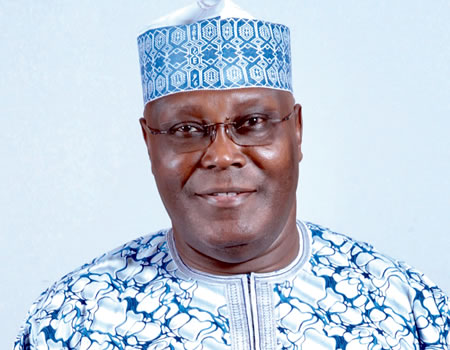 Barely 24 hours after the people’s democratic party (PDP) opened the doors for the sale of nomination forms to aspirants for all positions, former vice president Atiku Abubarkar has got his.

The party at its National executive council meeting NEC held a meeting in Abuja on Wednesday to announce that it would conduct its presidential candidates for the 2023 general elections on May 28 and 29th, 2022.

The party has also fixed 21st may 2022 for the governorship primary elections to pick its governorship candidates.

During the meeting, the party approved guidelines for the conduct of its primaries for all executive positions, fixing the presidential expression of interest form at 5million and the nomination form at 35million.

The North east business forum led by its chairman, Alhai Dalhatu Funakaye has purchased the expression of interest and normination form for Atiku

The forum said it bought the form in fulfilment of the promise it had made in 2021.

It was gathered that Atiku would make his formal declaration to run for president on Wednesday next week in Abuja.

In a remark to receive the nomination form, Atiku called on Nigerians to engage in a collective fight against the country’s challenges and assured that his presidency would not be a friend to ethnic and religious sentiments.

He added that “we have never faced these challenges before. our unity is threatened our economy is in its worse state of affairs and our security a disaster. He added that differences of ethnicity and religion is not in his character”.

He also called on Nigerians to be ready to sacrifice, as it is not going to be easy

Furthermore, Atiku commended the North East business forum for showing the way by making sacrifices from their business to purchase the forms. ‘the sacrifices have already displayed by this business community in an environment that has become harmful to businesses.’

In a remark by the chairman DAAR Communications, Raymond Dokpesi, he said ‘we are fully ready to salvage Nigeria, we are set to confront various challenges. We are concerned about security, the welfare of the country, about the youths and women too.

He announced that we would declare interest to run for presidency on Wednesday’.

However, the venue for the presidential primary elections has not been fixed but the parties timetable has shown that primary elections for the nomination of house of representatives and senate candidates will hold on May 12 and 14, 2022 respectively. Just as the congress to nominate the house of assembly would hold 7th may,2022.

According to the timetable, the sales of nomination for all offices began yesterday.