Over 100 Bandits Killed, 50 Motorbikes Recovered in Niger by Security Operatives 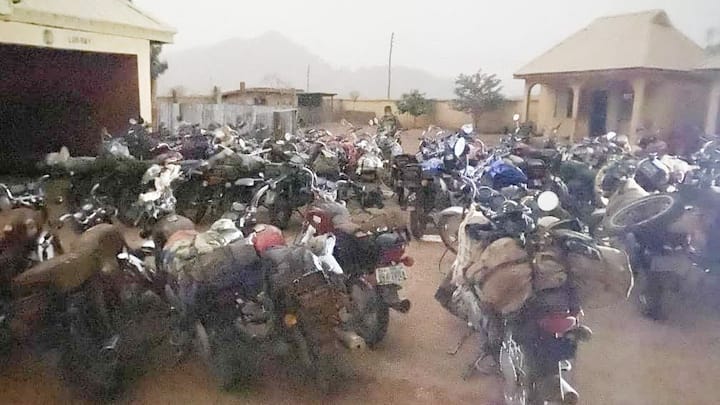 As Niger state continues its operations against criminal elements in its domain, joint security forces and local vigilantes on Wednesday, March 16 recorded yet another success. In Bangi area of Mariga local government area of the state, over 100 terrorists were killed, while over 50 motorcycles and weapons were recovered.

A video on Twitter emerged as the people of the area trooped to the streets to celebrate the successful operation.

The terrorists in their hundreds had invaded the town and attempted to set ablaze the police station, but they were swiftly repelled by the joint effort of the security personnel as scores of them met their waterloo. This elicited among the local populace who praised the joint security team for their efforts. Hon. Emmaunel Umar Bagna, Niger state commissioner for local government, chieftaincy affairs, and internal security also confirmed the operation in a terse statement sent to Legit.ng. Meanwhile, Governor Abubakar Sani Bello has condoled the Nigerian Police Force and members of the vigilante corps over the loss of their personnel in Nasko, Magama local government area of the state.

The governor in a statement by Mary Noel Barje, his spokesperson, described it as painful and unfortunate, losing such personnel in action all in a bid to ensure the safety of lives and property. He said: “The unrepentant criminals are bent on making some parts of the state unsafe to the residents, While some levels of successes were recorded recently following the onslaught by the joint security operatives which led to the killing of so many terrorists.” The governor also commiserated with the people of Munya local government area over the killings and kidnapping of many people in Chibani, Fuka, Dandaudu, and other adjoining communities.

Meanwhile, following the recent attacks in some communities in Munya local government area by terrorists, the Niger state government says it is reviewing the security architecture of the area to allow for more presence of security personnel in the areas. Commissioner Umar disclosed this at the Government House, Minna while briefing journalists on security updates at the instance of Governor Bello. Umar said terrorists recently attacked Chibani, Fuka, Dandaudu, and other adjoining communities in Munya local government area where some people were killed, and others kidnapped Wednesday, March 2 that it was a major victory for the state in its fight against terrorists and bandits. He said a total of eighty (80) motorcycles were recovered while some cattle were also returned to their owners.