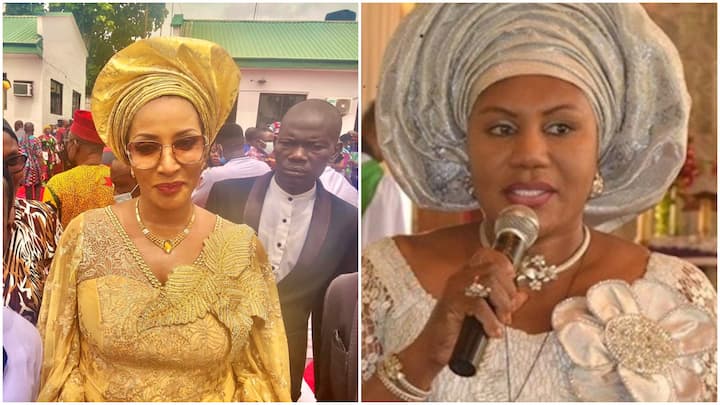 As Nigerians continue to react to the altercation between Ebelechukwu Obiano and Bianca Ojukwu, first lady Mrs Obiano had brazenly gone to confront Bianca, wife of Ojukwu, demanding to know why she should be at the event after vowing never to be a part of APGA activities.

Going further, Ebelechukwu was said to have mocked her that she never wanted them (her husband) to become the governor of the state. She ended up calling her names.

Irked with the statement, Bianca was said to have instantly delivered a slap to her resulting to a confrontation between them at the high table.

This has led to The Coalition of South East Youth Leaders,( COSEYL), to call for the immediate arrest and prosecution of Mrs Ebelechukwu Obiano, wife of the immediate-past governor of Anambra state, Chief Willie Obiano. COSEYL in a press statement jointly signed by its national president, Goodluck Ibem; and publicity secretary, Comrade Okey Nwaoru, strongly condemned the action of Mrs Obiano.

“In all standards or standing, Mrs Obiano is unqualified and too low to stand before Mrs Bianca Ojukwu. “There is no right-thinking person in his or her normal senses that will act what Mrs Obiano acted in an event graced by highly respected Igbo and non-Igbo personalities. “Mrs Obiano has desecrated the temple and honour of the entire Igbo nation and she has to be disciplined in accordance with the offence she has committed. “We demand the immediate arrest and prosecution of Mrs Obiano by security agencies. “As youth leaders of the entire Igbo nation, we cannot and will not accept or play down on such great insult on the wife of our great leader Dim Chukwuemeka Odimegwu Ojukwu.

Mrs Obiano has purchased some goods and those goods she bought have to be supplied to her in full without removing any item from the goods she bought. “We, therefore, declare Mrs Obiano the wife of former governor of Anambra State Mr. Willie Obiano persona non grata in Igboland for desecrating Alaigbo. “The order has been given and it must be strictly adhered to.”

Legit.ng had earlier reported that the altercation between both women temporarily disrupted the ceremony. A video which surfaced on social media later show Governor Soludo calming Ambassador Ojukwu after the former diplomat slapped the outgoing first lady. Mrs Obiano is rumoured to have a running battle with so many outgoing government officials in Anambra state.